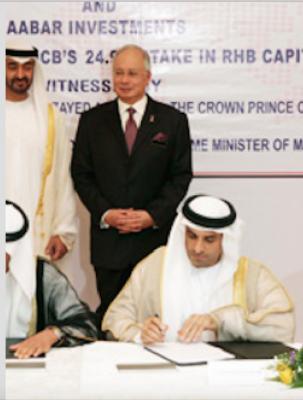 Khadem signs the deal while Najib looks on – but where did all the money go from the 1MDB/Aabar “strategic partnership”?

Aabar, a subsidiary of the IPIC sovereign wealth fund, has been enmeshed in a series of highly questionable and loss making deals with the scandal-torn Malaysian development fund 1MDB, which is directly controlled by Razak, using Jho Low as his proxy.

A Sarawak Report investigation has established that Blackstone, a BVI registered company which gives an address in Singapore, has been cited as the sender of a series of enormous dollar currency payments to both men between 2011 and 2012.  Our information includes telegraphic transfer documents passed through the American banking system.

The off-shore company uses a tactic familiar to watchers of Jho Low, in that it apparently seeks to give the impression that it is associated with the US global investment giant, the Blackstone Group. However, there is no link whatsoever between the legitimate multi-national and this secretive shell company.

In fact documents obtained by international investigators have ascertained that the signatory for the company is none other that Jho Low’s deputy, Seet Li Lin.  Seet also acted in the same capacity for the notorious company Good Star Limited, which lies at the heart of the 1MDB scandal and of which Low was the sole shareholder.

The records show that before it was liquidated in early 2013, just three years after starting operations, Blackstone Asia Real Estate Partners Limited transferred well over half a billion dollars into accounts belonging to the two men. This was exactly the period when two major loss-making power purchase deals were funded through billion dollar bond issues raised under a joint guarantee by the two funds. Much of that money appears to be unaccounted for, forming a large part of 1MDB’s current debt problems.

Documents obtained by Sarawak Report show that four separate payments were made to Khadem Al Qubaisi’s Luxembourg account at Banque Privee Edmond de Rothschilde Europe (headquartered in Switzerland) in 2012.  The sums were enormous.

Firstly, on 29th May 2012 Blackstone Asia Real Estate Partners transfered US$158,000,000 million into Al Qubaisi’s account, held under the name of the The Vasco Trust, of which he was the sole beneficial owner. 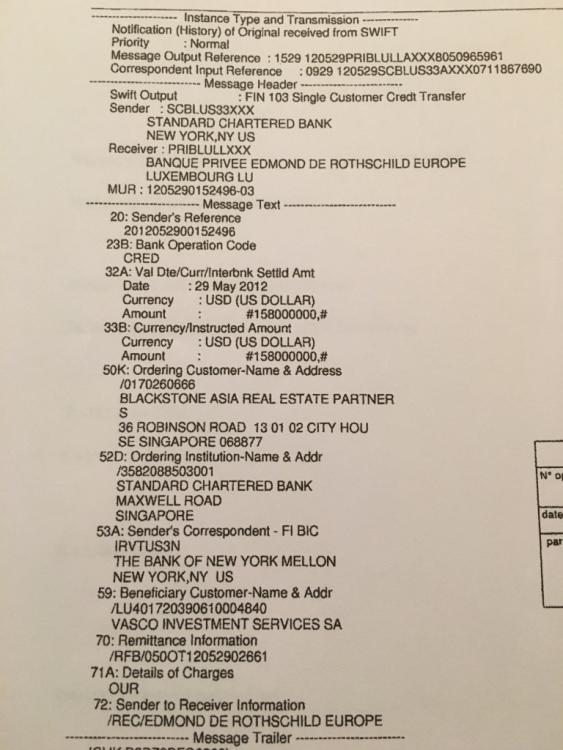 Blackstone BVI is registered under an address in an office rental block in Singapore – 36 Robinson Road.  Documents in the possession of SR confirm Al Qubaisi is the shareholder of Vasco Trust

Three further payments on August 3rd, October 31st and December 4th comprised US$100,750,000, US$129,000,000 and US$85,000,000 respectively.  It makes for a total of just under half a billion dollars – over two billion ringgit at current exchange rates, paid from a shady BVI company into the hands of the salaried Abu Dhabi fund manager over just six months. 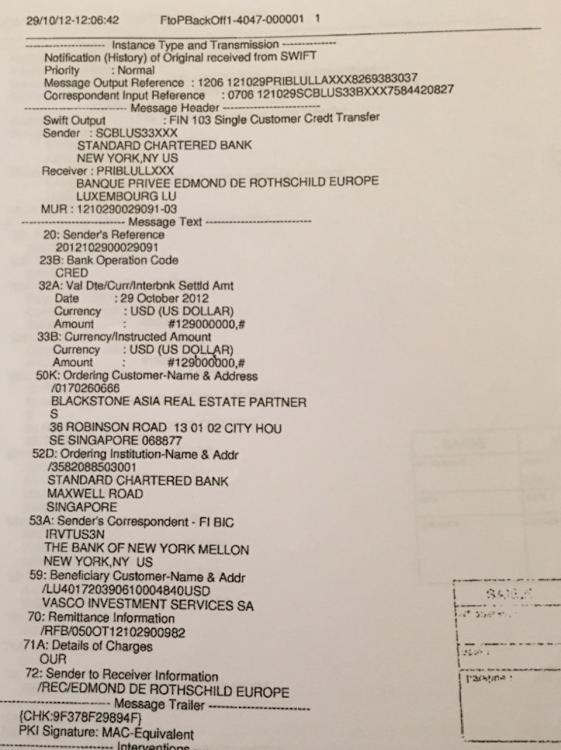 How did this ex-fund manager legitimately earn this sum – or was it a kickback?

Insiders have confirmed to Sarawak Report that these payments were regarded as kickbacks linked to Al Qubaisi’s involvement in 1MDB.

There was just one other major external transaction paid into Al Qubaisi’s Vasco account during the same financial year – US$20,750,000 was transferred from the other secret Jho Low owned company Good Star Limited on 20th February 2013.

Had there been a shortfall on the agreed Blackstone transfers, which was made up by Jho Low’s other company Good Star?

Otherwise, can the now sacked Mr Al Qubaisi explain these extraordinary secret payments into his accounts, just in the very period when Aabar and 1MDB were entering into a series of ‘joint investment’ deals from which billions have gone missing?

Payment to the Prime Minister!

There is an even more serious angle to this explosive set of discoveries.  Sarawak Report has learnt that the on-going 1MDB investigation into Najib Razak’s AmPrivate Bank accounts in KL has also established that enormous payments came in from the very same source a few months earlier.

In 2011 Blackstone Asia Real Estate Partners Limited paid a total of US$170 million into the same private account belonging to Najib Razak which later received US$680 million in 2013, as reported by Sarawak Report, along with the Wall Street Journal.

Sarawak Report has already reported there had been earlier payments, which had brought the final sum in the account to well over a billion dollars.  After the election over US$600 million was in fact sent exported back into personal accounts belonging to the Prime Minister in Singapore (now frozen) and the AmBank account closed. 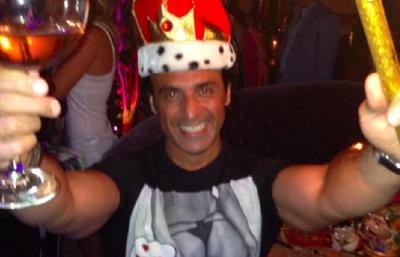 We are now able to disclose that the first of those series of payments, totalling US$170 million came from Blackstone Asia Real Estate Partners Limited (BVI) and it was supported by the very same identical letter of guarantee provided by the bogus sheikh ‘Saud Abdulaziz Majid al-Saud’, which also backed the later US$680 million ‘donation’ via yet another off-shore BVI company, Tanore Finance Corporation, in 2013.

As we have detailed, Saud Abdulaziz Majid al-Saud has turned out not to exist and the series of identical letters provide no details of his address or credentials.

No wonder the task force investigations into 1MDB ended up querying these enormous payments as part of their remit into Malaysia’s missing development funds.

The official investigators had clearly concluded (before they were rudely shut down, arrested, sacked and in one case murdered) that these transfers into Najib’s accounts were directly linked to the disappearances of vast sums of money from the company’s accounts.

History of an impersonator company

So what of this BVI based company, which suddenly transferred so much money into the accounts of the bosses behind Aabar and 1MDB?

Research into the shadowy world of BVI corporations has revealed that this particular shell company was incorporated on November 1st 2010 under the name of Foreign FX Trading Limited and changed its name to Blackstone Asia Real Estate Partners on 26th May 2011: 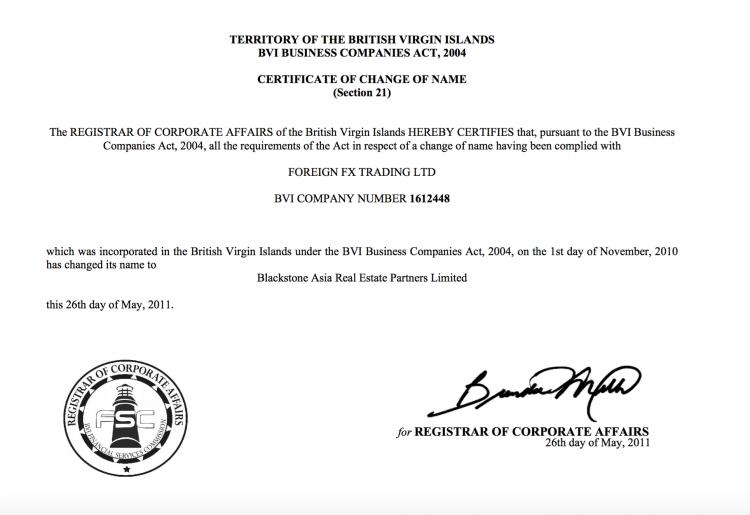 Having transferred the hundreds of millions of dollars into both Najib and Khadem Al Qubaisi’s accounts the company was put into liquidation on 30th April 2013, just before the Malaysian general election. 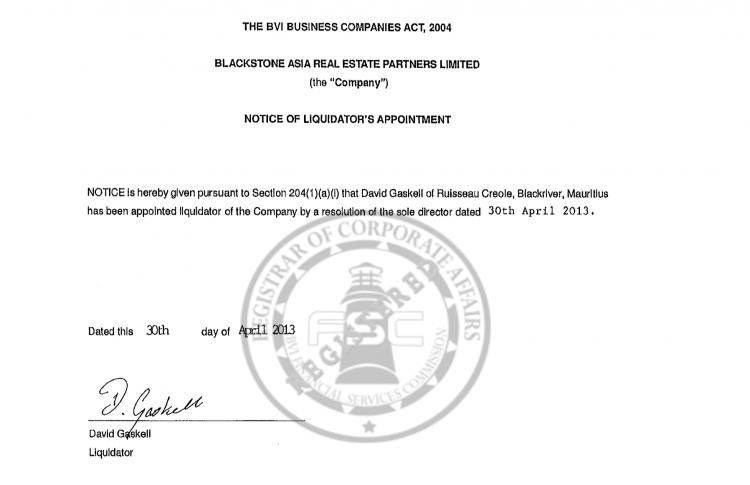 Time to close down this short-lived multi-million dollar operation?

Sarawak Report contends that the explanation for this series of events is that Blackstone Asia Real Estate Partners Limited (BVI) was merely another of Jho Low’s secretive vehicles for transferring money, which he habitually named to sound as if they belonged to more credible working concerns.

Other such companies which we have identified as being linked to Jho Low’s laundering activities are PetroSaudi International Limited (Seychelles); SRG (Strategic Resouces Global); Aabar Investments PJS Ltd and Merryl Capital. 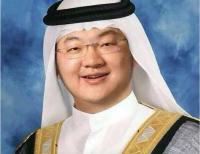 The same London based company, Offshore Incorporations Centre, was employed to incorporate both Good Star Limited in the Seychelles and the Blackstone bogus company in BVI.  Sarawak Report has already confirmed that international investigators have now established that the sole shareholder of Good Star is indeed none other than Jho Low.

Prime Minister Najib must surely now address what has now become increasingly plain and obvious, which is that much of the money recorded as having gone missing from the 1MDB/Aabar joint ventures, appears to now have been traced into bank accounts belonging to the two main players in these transactions – himself and Khadem Al Qubaisi.

The facilitator in the Blackstone BVI transactions was plainly once more Jho Low, using yet another of his web of off-shore vehicles to shift the cash, before he liquidated it (like Good Star) in an attempt to obliterate the evidence.

Your views are valuable to us, but Sarawak Report kindly requests that comments be deposited in suitable language and do not support racism or violence or we will be forced to withdraw them from the site.